In the south of France, the "Cote d'Azur" is mostly known for it's sweet climate and endless waves on a blue sea. But towns have grown and Nice is now one of the larger french town (https://fr.wikipedia.org/wiki/Nice), but many small other towns become pretty large. So the large campus of Sophia Antipolis (https://en.wikipedia.org/wiki/Sophia_Antipolis) covers all this part of the country and is one of the largest technology park of the world.

I already had the opportunity to go there for the JM2L (in english, Mediterranean days of free software) some years ago, so when I was told openSUSE was expected there but nobody else could go, I decided to go again.

The meeting, like most others, have a booth room and many talk rooms. A large advertisement campaign was deployed around, but Sophia Antipolis is not in center of a town, all the contrary, so only people really interested come. This makes the attendance small but very concerned.

I went there the day before, as the journey is 6 hours long by car and I didn't care to make the two way travel the same day. I was received in a very friendly way by Jack, a former University teacher and inventor of special equipment for surgery room in hospitals. Jack works with openSUSE since several years now, but not being a programmer, he was glad to have some help (even if I'm not a programmer either).

We could meet most of the organization team at lunch in a crowded restaurant on the Antibes harbor. Jack was hosting me and we went back home quite early. 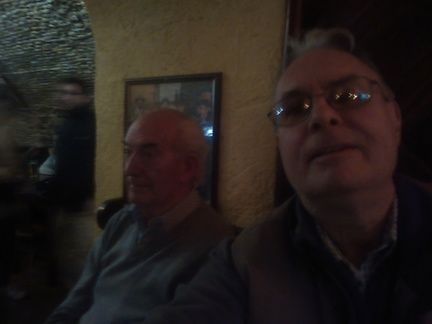 me on right, Jack on left

Next day, Saturday, I had to make a small talk about the way Leap 42.1 went out. The audience was not a number, in fact 4 people, but seemed to be really interested. In fact I discovered during these days that nearly any small town around have a Linux User Group. Many with mostly Ubuntu, but also Fedora or Mint and some Debian users. Not many openSUSE, but the fact that openSUSE was present was appreciated.

Sophia Antipolis being a technology park have not only Universities but also many large computer oriented companies but also startups.

After that I spend most of my time on the booth, installing various Leap on various computers, fixing some others and talking much with people there. 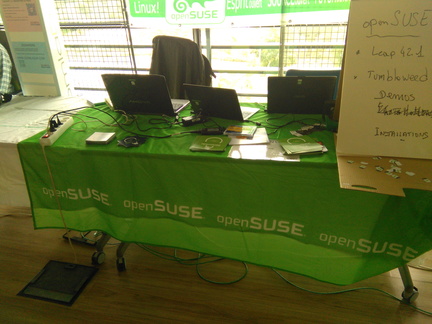 Many people don't know very well openSUSE and many underestimate our capabilities, I could make things a bit more clear.

About the booth, the green napkin is the best, being seen from everywhere :-) Jack and me could also wear the green vest and caps :-). I had some usb pen left and could let some (much appreciated), but it's the end I have only left what is necessary to keep leap with me :-). 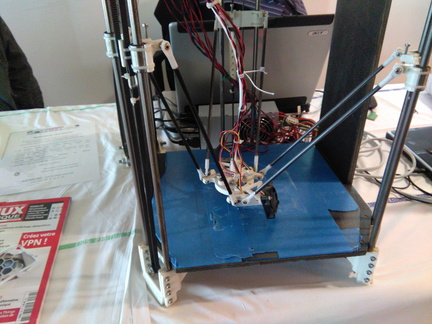 Around 17 o'clock, I closed the booth and went back home where I arrived easily around midnight.